Most people my age like retro music. I like retro games. I was a big fan of the King’s Quest series on the PC in the DOS days. I always played on a friend’s computer (we only had an Apple ][). Luckily, Sierra/Vivendi has re-released games 1 through 7 under the name King’s Quest Compilation

for under $20. What’s nice about this collection is that they are the original games, unmodified, not redone. This means, for example, that if the game used Mike Tyson, we get Mike Tyson, not Mr. Dream. Okay, I lied. This isn’t entirely true. For some stupid reason, King’s Quest 1 is the VGA remake from 1990, not the EGA original from 1983. But, alas, the others are original, and this compilation is still worth it. There’s only one catch. It requires Windows 2000 and XP, and I run OS X.

Since KQ1 through 6 were written for DOS, they cannot be run directly on Windows 2000 and XP. To get around this, they actually ship with DOSBox, an open source Intel x86 and DOS emulator. The good news is that DOSBox is cross platform and runs fine on OS X, too. So, with a little command line magic, it’s possible to get the King’s Quest series to run directly on OS X: 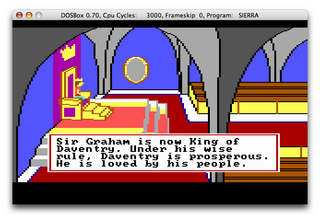 The trickiest part is actually getting the games off the CD. As is typical in the Windows world, the CD is an InstallShield package. This means it isn’t as easy as opening a zip file. By far the easiest way to get access to the files is to actually run the installer on Windows. You can do this on a separate box, using Bootcamp, or, my favorite, Parallels. After the installation finishes, the files you want will be in:

Copy this directory somewhere on your Mac. You truly only need the kq* directories, but copying the entire directory doesn’t hurt. You’ll actually need the PDF manual as at least one of the games requires you to lookup words in the manual as copy protection.

If you don’t have access to Windows, all is not lost. You can use the unshield program to extract the files from the InstallShield archives. This program isn’t smart enough to prompt you for the second disk, though, so you’ll need to copy the InstallShield data files to a temporary directory on your hard drive. From Disc 1 you need data1.hdr, data1.cab and data2.cab. From Disc 2 you need data3.cab. Once you have copied these files to the same directory, it’s time to open up the terminal. The first thing you want to do is install unshield using MacPorts:

Next, you want to extract the files somewhere, let’s say ~/kq:

For some reason, the file names unshield uses are not the same as the InstallShield install. For example, Kinq’s Quest 2 is in the directory Files2, not kq2. You may want to go through and rename the directories to something more meaningful like kq1 and kq2, etc. Remember, though, this is DOS, so stick with names under 8 characters. You can also get rid of all the _Support* and _Engine* directories.

At this point, you now have the original DOS files on your Mac, either by actually installing it on Windows and copying them to your Mac, or by using unshield. To actually run the games requires DOSBox, so install that also using MacPorts:

Running the games is now quite easy. You use DOSBox to launch the main game executable, usually named SIERRA.COM or SIERRA.EXE. For example, to run King’s Quest 2:

The game should start up in a window. Use Option-Return or the -fullscreen option to run in full screen for the full experience. Also, the -exit option is handy so that DOSBox quits after the game quits, instead of dropping you at a DOS prompt. Thus, a fully pimped out command would be:

DOSBox will manage to play the original EGA King’s Quest 1, if you own it or can find it on the ‘Net. KQ7 I believe requires Windows, so you’ll need to use something like Parallels or Bootcamp to run it on your Mac. But all in all, this is definitely worth the $20, even if you have a Mac.