The default git commit message for merge conflicts lists any files that were conflicts. However, it includes them as a comment with the # prefix. This means they’ll get stripped from the real commit message, by default. I like to keep them in the commit message, because it can useful to know which files were conficts later on. To do this, I would manually remove the comment prefix. Unitl now… TLDR: Use git commit --cleanup scissors, but the following example will explain how this works. I also answered this on Stack Overflow, but figured it would make a good blog post.

Moving to HTTPS with Let's Encrypt

I recently moved my site, www.dribin.org, over to HTTPS. For other HTTPS sites I’ve setup, I’ve bought a certificate from name.com. Their cheapest option is $10/year, which is very affordable. But this time I decided to try out Let’s Encrypt and their Certbot. The installation was pretty painless and seemed to go smoothly. I haven’t yet gone threw a renew cyle, though, which is required every three months. I’ll report back in June if I have problems.

This change did break all my embedded YouTube videos becuase those still used http. I needed to update the iframe URLs to also use https, and now all seems to be fine.

And finally, I updated all the links to my own site, replacing http with https. This wasn’t strictly necessary, as I have a redirect in place, but I figured it’d be nice to avoid the extra round trip for the redirect. I don’t think I’ve broken anything, but please let me know if you see anything wrong.

I’ve been using Linode since about 2012, and I cannot recommend them enough. A few months ago, they announced a cheaper $5/month plan. I recently switched to that, and saved a bunch of money. I pay for their backup plan, so the total is $7/month. On their previouls plan, I was paying $25/month. I was worried the downgraded specs would be a problem. Then again, I don’t get much traffic these days. I’ve been running on this downgraded server a couple months ago, and it’s working perfectly fine. A static website doesn’t require that much CPU or memory.

The downside is that you need to do all your own admin yourself. But I find it’s not that hard to setup Apache and some email services. If you’re willing (or wanting) to get your hands a bit dirty, Linode is great. If you want to give them a shot, you can try them out with my referral code: fb7465a0d5bef7335873ccdfc31bb8d3367c1945

It’s actually pretty amazing at how cheap hosting has become. When I first started hosting my own domain back in 2002, I used a colocation service. I supplied the Linux box, and for $100/month, I was ready to go with full root access. At the end of 2003, the hard drive on that machine died, and I moved my hosting to Server Matrix for $60/month. This was a dedicated physical server, but I did not own it. The upside is that if a disk died, I wasn’t responsbile for fixing it. And I still had full root access to install whatever I wanted. I jumped to a few hosting providers around this time, some via acquisition. By 2012, I was paying $70/month on SoftLayer.

But virtual private servers were becoming more popular around this time, and I didn’t need my own physical server. The cheapest Linode plan was only $20/month. So in 2012, I switched to Linode. Adding in $5 for backup, it was $25/month. But that was still way cheaper than SoftLayer. And now, with the new price reduction, I’m down to $7/month. And that’s quick summary of how, in the span of 15 years, my hosting costs have gone from $100/month down to $7/month, all with full root access. And I couldn’t be happier!

After many years of faithfully using Movable Type, I have finally switched to another blogging system: Jekyll. I’ve been meaning to move off Movable Type for literally years, since they dropped SQLite support in version 5, released in 2010. Jekyll meets everything I laid out in my 2009 post, Requirements for a New Blogging System. What finally pushed me to switch was my desire to write some new posts and fix some of the link rot, such as the link to my C4[3] slides.

After my server died in 2012, I was able to bring over the static content to the new server just fine with a simple rysnc. That alone is a huge testament to static content. However, I had no desire to try and get an old version of Movable Type up and running, which meant I could no longer edit posts or create new ones.

I tried twice to switch to Octopress, once in 2012 and again in 2013, but I kept running into various snags. It’s a good think I waited because Octoproess has been pretty stagnant since then. Octopress is basically a customized Jekyll setup, and since 2013, Jekyll has improved enough on its own that I am able to use it straight-up.

I’m now up and running on Jekyll and fixed the link to my slides. The installation went pretty smoothly, and everything seems to look okay. If not, please let me know. Right now, this is just the standard Jekyll install with a slightly tweaked Minima theme, but I’d like to customize it a bit more at some point.

I should have posted this literally years ago. Since I just learned that Keynote can easily publish presentations to iWork.com, I figure I have no excuse. iWork.com is dead. Thus, here’s my C4[3] presentation on unit testing: DaveDribin-UnitTesting-C4-3.pdf

Next week, I fly out to Cupertino to start working at Apple as a full time employee. This is a big move for me, as I’ve been working for myself since 2001. But this is truly a once-in-a-lifetime opportunity that I cannot pass up. As is the case for a lot of people my age, I began my computing experience on an Apple ][ and have been a huge fan of Apple ever since (with a slight defection to Linux in the late 90s and early 00s). Apple-related technology (Mac OS X and iOS) has been my main source of income since around 2006, so in many ways, this is a dream come true. I’m very excited to work with a great team and for a great company.

My wife and I recently brought home two new additions to the Ross-Dribin family: Lily and Zach! All four of us are doing great, but everything since then has been a blur. 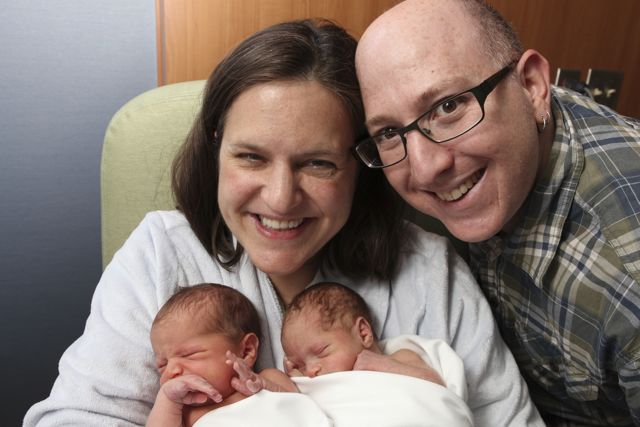 Back when I was writing the A440 sample code for my iPad Dev Camp presentation, I needed to generate a 440 Hz sine wave. The simplest way to do this is to use the sin() or sinf() standard C library functions. But there was one minor caveat: these functions required using floating point data types. However, floating point on the iPhone hardware is (or at least was) not that fast compared to integer calculations, especially when compiled in Thumb mode, which is the default. You could disable Thumb mode, but then the code size would be ~35% larger.

Or, you could avoid floating point altogether. Thus, I wrote trigint, a 100% integer-based trigonometry library. It uses a 16-entry lookup table plus linear interpolation so it’s quite memory efficient, yet still accurate enough for most purposes. Since it’s written in ANSI C99, it can be used on 8-bit microcontrollers, like an Atmel AVR with avr-gcc. Here’s the code and the API documentation.

How fast is it? Take a look at the numbers on a 1st generation iPod Touch. In summary, trigint_sin16() is about 4.4 times faster than sinf() and 6.7 times faster than sin() in Thumb mode. Without Thumb mode, the gap closes a bit to 3.8 times faster and 6.2 times faster, respectively. I haven’t, yet run the benchmark on the iPhone 4 or the iPad, so it may not matter as much on the more modern hardware; however, it’s still useful for the the 8-bit MCUs like the AVR, though.

trigint is essentially a C version of the Scott Dattalo’s sine wave routine for the PIC microcontroller. Credit goes to Scott for coming up with the algorithm. He’s also got a whole write up of sine wave theory. Scott is one of the most brilliant assembly coders I’ve ever run into. He helped me optimize a CRC-16 routine in PIC assembly, years ago.

Here’s a chiptune cover of Journey’s Don’t Stop Believin’ I made during some time off I had last December. I just haven’t gotten around to posting it until now (though I did make a few tweaks yesterday). I think we were watching Glee at the time and remember thinking a chiptune version would be even better than theirs. It was made with FamiTracker, and this video is of the song being played in FamiTracker:

You can listen to and download the MP3 from its 8bitcollective page. Or download the NSF (what’s an NSF?) and play it in an NSF player, such as my own Chip Player. Or perhaps something a bit more stable like Audio Overload.

The C99 language added some pretty neat features to the ANSI C we know and love (now known as C89). I used a construct called compound literals in my iPad Dev Camp presentation, and it seemed new to a lot of people. Here’s a summary of some lesser know features about C99 that are worth knowing. And, since Objective-C is a strict superset of C, all this applies to Objective-C, as well. Best of all, as of recent Xcode (3.0? 3.1?), C99 is the default C dialect for new projects, so you don’t need to do anything to start taking advantage of these.