A few weeks ago, okay, almost two months ago now, I decided to make homemade bagels. I admit it, I’m a bagel snob. Most bagels you get these days are just round bread with a hole in the middle. Too soft, no crust. Bleh. Not even worth eating.

Granted there are a few places to get good bagels in Chicago, one of my favorite being New York Bagel & Bialy in Niles; however this isn’t very convenient for us city folk. While there are a few places in the city that import their bagels from Skokie (Eleven City Diner and Beans & Bagels come to mind), sometimes you just have to take matters into your own hands. 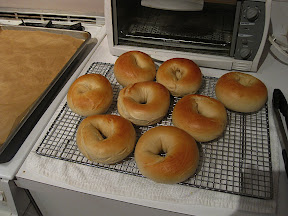 I ended up trying the recipe from the fine folks at Cooks Illustrated. It’s in their New Best Recipe

book as well as on their website, if you have an account. The recipe is fairly straightforward, though will probably need a few specialty ingredients, like high-gluten flour and barley malt syrup. I had to get both of those at King Arthur Flour. The high-gluten flour sounds like it can be used for pizza dough, too.

The end result was fabulous bagels! Boiling them before baking gave them a nice, chewy crust. The inside itself was not too soft and dense. And as good as they were straight out of the oven, I felt they were even better the next day. These were certainly as a good as any bagel I’ve ever had. My wife even called them as good as Ess-a-Bagel in New York, which is quite a compliment! These were definitely worth making again. 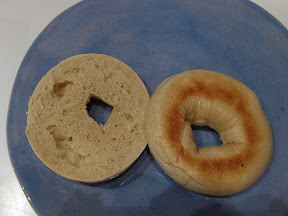 If you like bagels, definitely try making them at home. The only downside is that you need a decent stand mixer. Because the dough is so dry, it’s very stiff and gave my stand mixer a real workout. In fact, I think it was responsible for stripping the gears on my KitchenAid Artisan mixer. I tried to make another batch of bagels a couple weeks ago, and it wouldn’t run at low speeds anymore. I can recall a couple other recipes that stressed the motor, too, but I think this dough just pushed it over the edge.

After investigating the repair options, we decided to get a factory refurbished KitchenAid Pro 600. I have too many attachments to switch to another brand, at this point. Talk about vendor lock-in, eh? The motor is more powerful and the gears and gearbox are all metal, so hopefully they won’t strip again. It’s only got a six month warranty so I just need to put it through its paces for those six months. The new mixer will arrive in about a week, and the first thing I’m going to do is make another batch of these.